Final results in the spring 2022 competion

Team 4 is champion and team 1 maintains its place in the 3rd division!

Friday evening, 29 April, the last matches of the spring league for the seniors were on the programme with three teams playing at home.

Team 4, playing in the 3rd class, still needed 3 points to win the championship. After the first three single games the score was already 3-0 and the championship was a fact!
Hereafter the pressure was off and the team easily beat Het Nootwheer from Purmerend with 7-3.
When the match was finished, the championship was celebrated together with the opponent with champagne, delicious snacks and flowers for the champions. Congratulations to Fery, Keisuke, Arkady and Martin and good luck in the autumn in the second class.

The 1st team, which plays in the national 3rd division, faced the difficult task of avoiding relegation with a 7-3 victory. Team leader Arjan Verburg could not play at all due to a knee injury and was sorely missed. Ryan Saheblal was also unable to play the last match due to a shoulder injury. Harish Kumar, player of team 3 and playing in the 2nd class, was eager to fill in. The away match against tonight’s opponent, Rijnsoever from Katwijk, where Harish had also played as a substitute, had ended in a heavy 8-2 defeat. An almost impossible task seemed imminent.

Brian van den Heuvel started against Jeroen Holten, a player he had never beaten in four previous encounters. This time, however, things were different and after a badly lost first game, games 2, 3 and 4 were all won with 11-9. Harish Kumar played a great match against Pascal Breuer, whom he almost defeated last time as well, and managed to win in 3 games with varied play. Very impressive when you consider that there is a difference of four (!) classes between 3rd division and 2nd class. Brian Bakker also played a fine match against Johan Vliegenthart and with good block play won in 4 games. After Brian and Brian had also won the doubles in 3 games, it looked as if the impossible was going to happen with an intermediate score of 4-0.

This certainly did not break Rijnsoever’s resistance. Jeroen was able to win the match against Harish with difficulty in 4 games, the third game with 13-11 turned the match in Jeroen’s advantage. Brian van den Heuvel then managed to survive a match point against Johan in the fourth game and then narrowly won the fifth game with 11-8. After two easily won games Brian Bakker seemed to be on his way to a quick victory, but after a nice fight Brian won 15-13 in the fourth game.  The score of the other relegation competitor Avanti from Hazerswoude, who played against the already relegated SVE from Utrecht, was surprisingly 5-2 in favour of SVE so that both Amstelveen and Rijnsoever were safe. Nevertheless, three more beautiful games were played and the last game was even won with 11-9 in the 5th game at 00.30 hrs. The evening was appropriately closed by having a drink and a bite to eat while evaluating the past competition season.

If you want to play table tennis and maybe even competition, please visit our website www.ttvamstelveen.nl or send a message to info@ttvamstelveen.nl .
You can come and play 3 times for free to see if the sport and our club suit you. 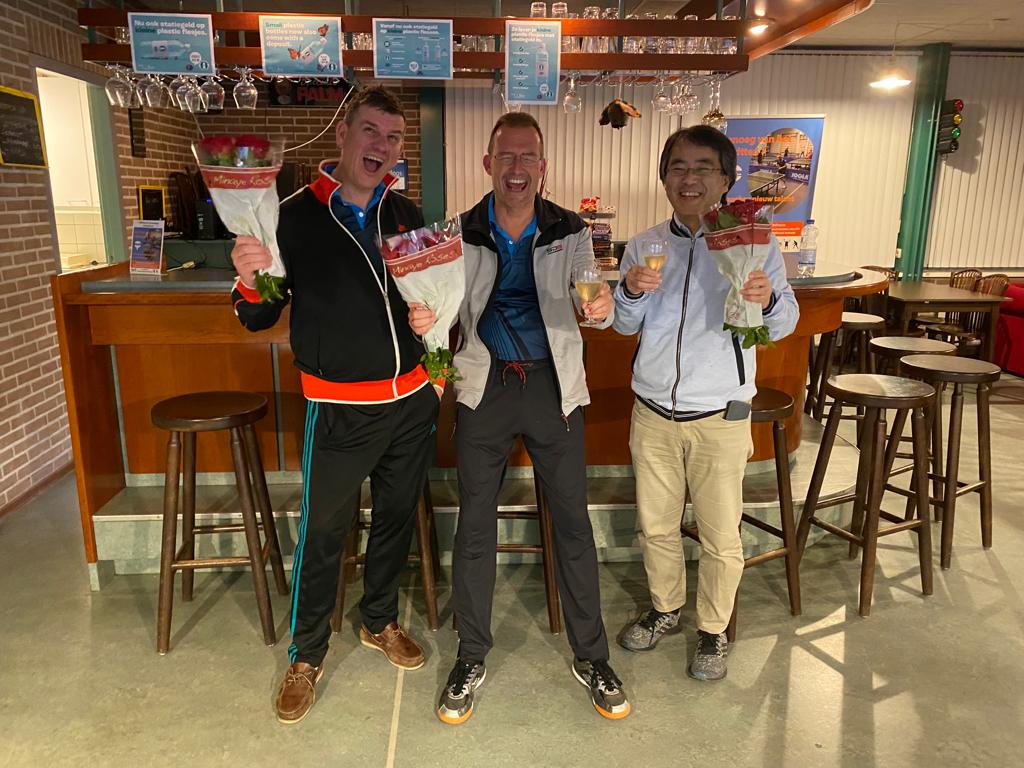